Stimulus or business as usual?

It’s hard to argue with a new bridge.

The view of the existing bridge between Branson and Hollister is now a historical relic. A new bridge is being constructed now, as you can see below. Once the new bridge is completed, the old bridge (built in 1931) will be closed for major repairs before reopening in a couple of years. 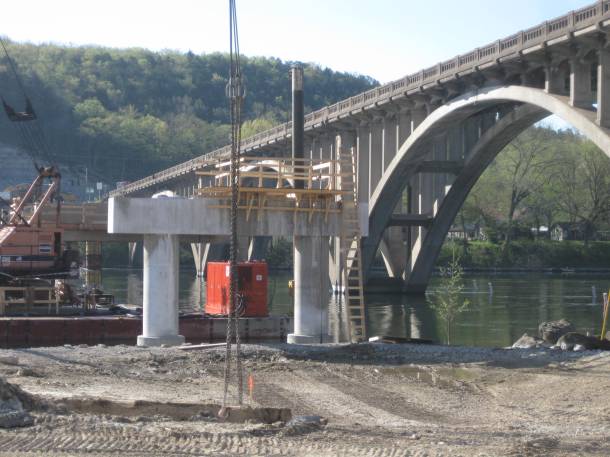 The $7.4 million new bridge project is being paid for largely by so-called stimulus funding, appropriated under the American Recovery and Reinvestment Act. The rehabilitation of the old bridge is is financed from an $4.8 million earmark arranged by Rep. Roy Blunt.

The congressional election season will be full of allegations about which party did or didn’t do what and whether Obama’s stimulus was effective.

All members of Congress and their constituents come up with a wish-list for their districts.

The truth is that we depend on our representatives in Congress to bring home the bacon. Once you smell it, it’s hard not to eat it.

The spending may be called  stimulus, earmark, corporate welfare, economic development, essential infrastructure, for-the-children-who-are-after-all-our-future, national security or social safety net–or just plain pork.  It’s always  popular at home, regardless of whether it was flavored by Republican or Democratic smoke.