Nelson Harlan and dreams of gold 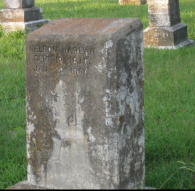 My Dear Daughter One and all the rest of you,

By the will of Almity God, our Heavenly Father I yet survive. Hopeing that He is watching over my Beloved Children with the care of a Heavenly Father who I hope will preserve our lives and let us meet once more on earth, if not God be praised, we will try and meet in Heaven, where parting is no more.

I am going to see you all the first opertunity; if I have to leave my business unsettled, for I have business to transact with the U. S. Government for the value of my improvements under the treaty of ’35, of which I have never got. I am also going to Alabama to develop a mine I know of, pure native virgin silver, if I can accomplish what I wish to, my dearest children, you can live free from want and the cares of this life, certain.

I could go with two or three hundred dollars. That would not be enough. My health has been very poorly for some time, tho I feel first rate at present. I am living with a young friend of mine and his wife and one little babe. We live in a nice brick building, well furnished. Hired help is here, also on two or three other ranchos of six or seven thousand acres, all of which belong to the father of this friend of mine, with stock in proportion. Now my dearest children it don’t cost me a cent to live here, I have the best the country can afford those men of wealth are my friends. They say I shall not want for any thing. I wear good clothes ride a fine horse of my own, which is kept or fed free. I do not have to work unless I see fit.

We live 2 miles from Visalia, it is a pretty inland citty. I have many friends here, and could get money to go home on any time I would like. I don’t wish to go that way, I will have of my own after awhile.

Tell Mr. Twist to send me the Cherokee Advocate I will send him a Visalia paper. Write me soon. God Bless you all.

From your affectionate Father,

What might have been the effect of this letter? It was discovered in a junk store in Tahlequah by Mary Adair a few years ago, tucked into a book.

My mother’s older sister Fannie said that the Harlans weren’t really Cherokees, but redfaced Irish, who took up with the Cherokees to see what they could get. Fannie was probably talking about her great-grandfather, Nelson Harlan, who was born in Wills Valley (also called Willstown, now Fort Payne), Alabama in 1813.

When he wrote the letter above to his children in 1879, he probably had not seen them since they were small, nearly 30 years earlier, when he joined the California Gold Rush. He left his family in Indian Territory, where Nelson and Jennie settled in the Piney community just across the state line from Dutch Mills, Arkansas, about 35 miles north of Fort Smith. Their daughters Sarah and Mary were born in Alabama before the Trail of Tears. Their family continued to grow in Indian Territory, with another daughter, Alice in 1841, followed by John in 1845, Nancy in 1849 and Nelson, Jr., in 1851.

Nelson joined a group of about 130 men from the area around Van Buren, Evansville and Dutch Mills, Arkansas, and nearby areas of Indian Territory, who assembled a wagon train and headed out from Fort Smith, which had become a major departure point for ’49ers, angling across Kansas and Colorado, eventually reaching the area on the western slope of the Sierra Nevada mountains, where John Sutter had found gold in 1848.

The 1850 census of El Dorado County, California (between Sacramento and Lake Tahoe) lists Nelson Harlan as having $50,000 worth of real estate.

The decades of the 1850s and 1860s must have been incredibly difficult for Nelson’s family in the Cherokee Nation. The infighting among the Cherokees intensified as it reflected the conflicts raging in the border states between unionists and seccesionists over slavery and states’ rights.

When the Civil War broke out in 1861, the Cherokee Nation initially declared for the Confederacy, but split a few months later. Principal Chief John Ross (a slaveholder), with the backing of the non-slaveholding Cherokees, remained loyal to the Union. Stand Watie emerged as the leader of the Confederate Cherokees, along with many of the families of other Treaty Party signers.

Tensions among the Cherokees drove the families of Confederate Cherokees from their homes. The more prosperous members of the Bell, Adair, Rogers, Starr and Watie families set up housekeeping in towns in north Texas, while the remainder lived in camps along the Red River, near Hugo. Jennie Nicholson Harlan was among these. Her daughter Mary died in 1862 at 24, leaving a newborn Thomas Devine, and Jennie died in 1865. His daughter Alice Crittenden lost two of her three infant children during this time of exile, grandchildren that Nelson never knew.

When Nelson finally returned to the Cherokee Nation around 1890, without gold and silver, it’s hard to imagine that he was well-received. But his children and grandchildren may have been curious about this dreamer, whose stories may have given them hope during difficult times.