This property is condemned! How does that work? 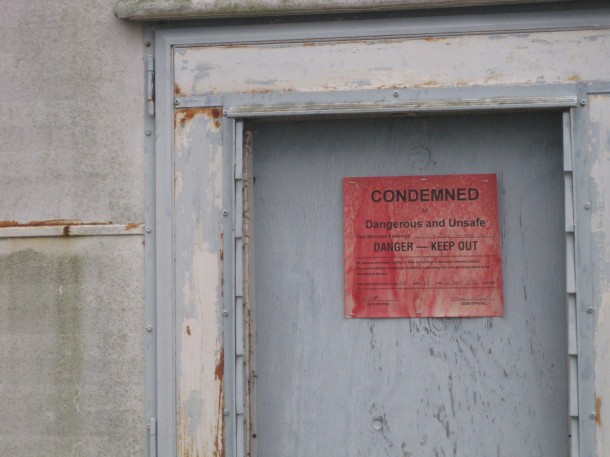 Condemnation of property gets the blood pumping. The signs posted on this dilapidated trailer by the City of Branson indicate that it is “condemned,” but most of us don’t understand exactly what this means.

Condemnation has two meanings for local governments and property owners:

The condemnation sign on the dilapidated trailer has to do with the City of Branson’s determination that the trailer does not comply with the City’s housing code. This post is not about condemnation for eminent domain. But under either type of condemnation, the property owner has a right to due process.

The Ozarks countryside and its towns are full of commercial buildings and houses that have not been maintained. Often, the aging of the structures has resulted in fatigue: foundations tilt, roofs sag and leak. Then windows are broken.  Sometimes the owner, due to age, death or change in financial fortunes, cannot repair or remove the structure.

Local governments have the power to adopt ordinances requiring demolition or repair of buildings because dilapidated buildings have been determined by the Missouri legislature to adversely affect public health and safety.

Due process requires that these ordinances contain provisions to give notice to the owners of the alleged violation of a specific regulation and an opportunity for a hearing before a final determination is made that there is indeed a public health or safety violation.

If the owner doesn’t promptly pay the bill, the government’s expense is put in the form of a “special tax bill,” which is added to the regular property tax for the property.

Local governments are often hesitant to authorize demolition, often doing nothing except in response to complaints. When complaints are received, the property owner is usually given ample time to remedy the situation. Only as a last resort will a unit of local government spend taxpayer dollars to demolish a private building.

This process was examined by the Missouri Court of Appeals in Village of Blodgett v Rhymer, decided March 25, 2009. The Village had notified Rhymer that an abandoned church building owned by Rhymer violated the Village’s ordinance. Rhymer hired a company to tear down the old building, but the company left an open basement and a pile of debris. The Village’s attorney sent Rhymer another letter giving Rhymer 10 days to clean up the mess and fill the hole.

The Village then hired a contractor to remove and dispose of the debris and fill the hole. Then the Village asked for reimbursement in 10 days. When Rhymer did not pay up, the Village sued Rhymer for the amount spent, obtained a judgment against Rhymer and asked the sheriff to sell the property at public auction, so that the Village would get repaid for making the property safe.

Rhymer appealed, claiming that the Village didn’t follow its own ordinances, which require notice of the violation, a hearing and a determination that a condition exists which requires remediation.

The Court of Appeals agreed with Rhymer, stating that the series of letters from the Village attorney did not provide the notice required by the ordinances and that the appearance of Rhymer at the Village trustees meeting was not the hearing described in the ordinances. Nor did the Village properly make a finding that the condition on Rhymer’s property was “an immediate danger to the health, safety or welfare of the public,” which was a prerequisite to the Village’s right to abate the nuisance.

The Court of Appeals reversed the judgment against Rhymer, saying, “Once the Village decided to enact ordinances to issue and inform Appellant it would be enforcing them, it could not ignore the notice and hearing provisions within those ordinances and proceed in a different manner.”

Often public officials and citizens rather casually brand other citizens as flagrant violators. But in this case, the appeals court determined that the Village and its attorney failed to follow the Village’s ordinances and never properly made their case against Rhymer.

Rhymer perhaps didn’t comply with the ordinances for maintaining the property, but the Village failed to follow the proper procedures for determining the existence of Rhymer’s violation, attempting to deprive Rhymer of property–money, in this case–without due process.

For the trailer in the photograph, the City of Branson has posted a notice of violation on the trailer, with information about the procedure for a hearing , indicating that the City understands that its property owners are entitled to due process before they are deprived of their property.