As Missouri’s public roads have been straightened, many odd kinks of roadway are left over, along with triangles of land between the old roads and the new roads. As we drive, we see these pieces of the old roads, sometimes serving as frontage roads along divided highways. In some cases, such as in McCullough v. Doss and Allen, the triangle on the west side of the new road was sold to McCullough, even though they might have been able to claim that at least the west half of the abandoned right-of-way of the old public road was theirs. Here’s an image from the Stone County Assessor’s maps: 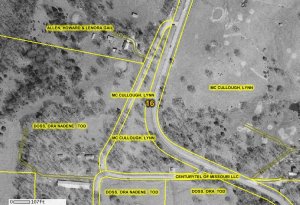 The State of Missouri built Highway 39 in the mid-1950s, mainly along an old public road. At the point shown in the image, the severe dogleg in the old public road wasn’t followed, leaving a gentler bend.

Doss and Allen argued that this non-use statute does not apply when the old roadway was voluntarily given to the county for a roadway. Because McCullough didn’t prove that it wasn’t voluntarily given to the county, the trial court committed error by applying the nonuse statute. Doss and Allen cited a couple of cases in support of this argument from the Southern District of the Missouri Court of Appeals.

Doss and Allen also argued on appeal that McCullough’s evidence of nonuse by the public was insufficient. McCullough, they said, obstructed the roadway so that the public couldn’t use the road.  The Supreme Court held that his obstruction didn’t matter, implying that if the public was disturbed, the public should have sought an injunction to force McCullough to remove the obstruction.

For his adverse possession claim, McCullough and his son testified that they had used the old roadway to store farm equipment for 40 years. No mention was made of any evidence to the contrary. The Supreme Court said that the trial court had the discretion to determine the credibility of the testimony of the witnesses.

The facts of this dispute point out the necessity of landowners taking steps to assert their rights to avoid losses by adverse possession. Doing so often requires consulting with surveyors and real estate lawyers.

I'm a lawyer who lives in Branson, Missouri, whose professional interests involve real estate, construction and local government.
View all posts by Harry Styron »
← Mid-2010 economic outlook for the Ozarks
Branson Landing and the dilemmas of economic development →