Brooks Blevins has given us a fresh and refreshing new look at the early history of the Ozarks in the first volume of A History of the Ozarks, published in July 2018 by the University of Illinois Press. I bought my copy through Amazon.

This history is refreshing because it includes many aspects of Ozarks history that I have learned and forgotten, as well as including lots of things that I never knew.

It is fresh because it does avoids the errors of many histories of the Ozarks. The introduction is essentially an essay to counter the stereotyping of the people of the Ozarks. I highly recommend the book just for this part.

In addition, the book sidesteps many errors of previous histories, rather than:

There’s a good balance of cultural history, political history and economic history, leavened with a few tall tales, such as that of Duke, who tamed a herd of elk calves and taught them to pull his wagon, carrying him away from the Ozarks when too many settlers came in.

I’m anxious for the next volume, which takes up with the gathering clouds of the Civil War. 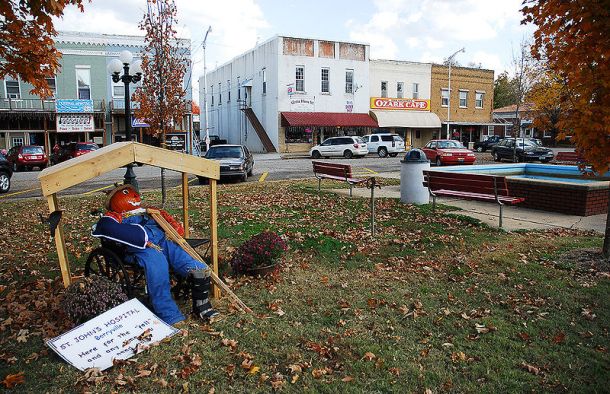 But in 2010, for reasons not explained in the Arkansas Supreme Court’s opinion, Parker v. Crow, Eastern District Judge Gerald Crow ruled that henceforth there would be only one judicial district in Carroll County.

Eureka Springs, west of the Kings River, is a tourist town and art colony, known for its Victorian architecture, with bathhouses, galleries and restaurants in a setting of steep hills and narrow streets, all maintained with strict building controls.

Berryville sits on a stretch of prairie east of the Kings River, surrounding by rolling hills and cattle and poultry farms. A Tysons poultry processing plant and a Walmart Supercenter are among the town’s largest employers.

In 1883, the Eureka Springs Railway was extended south from Missouri, and Eureka Springs quickly blossomed into a small city of hotels (quaint and magnificent) and bathhouses, fed by the waters of dozens of springs. The same year, the Arkansas General Assembly passed Act 74, creating two judicial districts for Carroll County.

Judge Crow’s first contention was that the 1883 act of the legislature creating the two districts was unconstitutional because it attempted to create a new county, even though the language of the statute specified that the districts were to keep separate records as though they were in different counties, but that Carroll County should in all other respects “be one entire and undivided county.”

Judge Crow also determined that at 1997 legislative act, among other laws, repealed the 1883 act by implication. The Arkansas Supreme Court recited the rule that repeal by implication “is never allowed except where there is such an invincible repugnancy” that the old and new laws “cannot both stand together.” The 1997 law, and the others, may be messy and partially inconsistent, but they did not specifically repeal the 1883 act.

Almost as an afterthought, the Arkansas Supreme Court examined the Arkansas constitution, noting that the power to establish or dissolve judicial districts was a legislative power, not something that a judge could do.  Quashing Judge Crow’s attempt to merge the two judicial districts, the Supreme Court said that his order “shows a plain, manifest, clear and gross abuse of discretion.”

Is it necessary to affirm the right to hunt and fish in state constitutions?

“I liked it better when I was hunting birds there,” said the mediator, when he figured out the location of the garages at a Branson condominium. Seven attorneys gathered to attempt to resolve a dispute over rights to use four garages at the condominium.

As the Ozarks and much of rural America becomes suburbanized, many people want to protect their cherished traditions of hunting and fishing. In ten states, citizens have amended their constitutions to affirm the right to hunt and fish. Oklahoma has done so and the proposal is being considered in Arkansas and Tennessee.

As I hear people in the Ozarks express themselves about land and water and fish and game, I hear the same arguments that have been made to affirm the rights of native peoples to continue their hunting and fishing traditions, some of which have been protected from state regulation by federal law.

The Ozarks have been populated by people of mostly European ancestry for nearly 300 years. After many generations, it’s no wonder that members of old Ozarks familes feel like they need to assert themselves to hang on to their culture. And those whose families haven’t been around as long would naturally want to feel secure in their adopted traditions.

Getting outside in the Ozarks

Within a week, the heat wave will have run its course and we’ll surely have a little rain. Then we can get moving again in the wonderful Ozarks outdoors and watch the greens become gold, orange and red.

Here are some links for outdoor activities END_OF_DOCUMENT_TOKEN_TO_BE_REPLACED

Growers vs. packers vs. USDA

The disputes between growers (of cattle, hogs and poultry), the small number of purchasers (packers) and the USDA dwarfs the Shirley Sherrod affair in economic importance, especially in the Ozarks.

While the character assassination and redemption of Shirley Sherrod was essentially contrived by and blown up by the media, the real economic tensions between those who raise animals and those who buy them and convert the meat into consumer products has reached a point at which Congress in the 2008 Farm Bill asked the USDA to propose regulations to address several problems.

The problems arise out of the unequal END_OF_DOCUMENT_TOKEN_TO_BE_REPLACED

Mid-2010 economic outlook for the Ozarks

On January 3, 2010, I posted a glum summary of published economic reports from Federal Reserve Banks in Kansas City and St. Louis and other sources from the metro areas that surround the Ozarks. My rough guess is that the economic activity in the Ozarks is primarily generated by the surrounding metro areas, which create demand for goods and services produced in the Ozarks, an idea that looks something like: END_OF_DOCUMENT_TOKEN_TO_BE_REPLACED

“Winter’s Bone” and the image of the Ozarks

This summer, people around the country will be seeing the movie version of Daniel Woodrell’s 2006 novel, “Winter’s Bone.” They’ll wonder if the movie shows life in the Ozarks as it really is. The movie was filmed in Taney and Christian counties in Southwest Missouri, during the winter of 2009. You can see the trailer and read a synopsis of the plot.

This movie, with its glowing reviews and big success at the Sundance Film Festival, raises a couple of interesting questions: END_OF_DOCUMENT_TOKEN_TO_BE_REPLACED

You can ignore an affidavit of lost mortgage in Arkansas. Is this news you can use?

Maybe not, but there’s still a lesson in Wetzel v. Mortgage Elec. Registration Sys., Inc., a May 20, 2010 decision of the Arkansas Supreme Court.

Reformation, or when may a court change a deed?

When Rocky Lawrence saw the rig move onto his property to drill a gas well, he checked his deed. Sure enough, nothing on the deed indicated that the seller of the property reserved the mineral rights.

Sarah at Conway Title had one of those awful moments, realizing that the reservation of mineral rights was not in the deed that Patsy signed, though the purchase contract stated that the mineral rights would be reserved to the seller. Sarah asked Lawrence to sign a correction deed, but he refused. Then Lawrence filed a quiet title suit, hoping to affirm that he and his wife owned the mineral rights and would receive royalties from natural gas produced from the well on their land.

People ought to be bound by what they sign, especially when it comes to real estate. Otherwise, what would be the point of putting the contract or deed in writing or reading a contract before signing it?

Mistakes are inevitable, and it would be unfair to allow someone to benefit from a mistake at the expense of another. Courts have developed the equitable remedy of reformation for the correction of mistakes and have also developed some strict rules for determining whether to reform a contract or a deed. Though the exact rules vary a bit from state to state, the basic rules are these: END_OF_DOCUMENT_TOKEN_TO_BE_REPLACED

Why get a lawyer to help you sell a business?

In this interview for the New York Times’ online “You’re the Boss” feature, I give some of the reasons. Here’s the link: http://boss.blogs.nytimes.com/2010/03/08/how-a-lawyer-can-help-you-sell-your-business/

Bentonville business broker Barbara Taylor interviewed me a couple of weeks ago.

Barbara is one of a dozen or so business people whose blogs appear in the Small Business Section of the online version of the New York Times. Jack Stack, of Springfield, Missouri, is the other Ozarks representative on the Times’ blogging roster.